Jesus is trying to help his friends pay attention to What Matters. He goes up on a high mountain with some of his best friends and is transfigured into a shiny, bright creature. His friends immediately build a little shelter so they can stay together forever, but it’s not meant to be. Jesus didn’t come to stay forever. In fact, he keeps trying to tell them, “I’m leaving soon. Don’t you see?”

A little while later, the group is walking through Galilee. Jesus is trying to fly under the radar. He doesn’t want anyone to notice him and tries to explain to his friends, “I’m going to be betrayed soon. They’re going to kill me. But a few days later, I will rise.”

And Jesus catches them in the act. In my mind’s eye, I can see him shaking his head slowly. “Don’t you see? Whoever wants to be first has to be last and servant of all.” And then he finds a little child nearby and picks the child up. He walks into the center of the crowd holding the child close and says, “Whoever welcomes a child like this? Well, they’re welcoming me. And anyone who welcomes me is really welcoming the one who sent me.”

He’s trying to show them What Matters. Do they see? Do we see?

Earlier this year when I went to the Festival of Homiletics, I heard a powerful sermon by the Rev. Nadia Bolz-Weber on this passage. Nadia cautioned us about the image we might have in our minds when we think of Jesus picking up a child as a prop. She says, “Lest, when we hear this story, we picture a cute little well dressed kid from an ad for the Gap – we should consider how differently children were treated and perceived back in Jesus’ day. Because sometimes it’s difficult to remember that the sentimentality we as Westerners attach to childhood is a fairly recent thing.”[1]

We need to readjust the illustration in our head when we think of Jesus. Nadia says,  “These children didn’t exactly take bubble baths every night before being tucked into their Sesame Street bed sheets and read Goodnight Moon. There was no sentimentality about childhood because childhood was actually a time of terror.  Children in those days only really had value as replacement adults but until then they were more like mongrel dogs than they were beloved members of a family…Children were dirty and useless and often unwanted and to teach his disciples about greatness and hospitality, Jesus puts not a chubby-faced angel, but THIS kind of child in the center, folds THIS kind of child into his arms and says when you welcome the likes of THIS child you welcome me.”

And so Nadia’s sermon has me thinking this week about children. The ones in our midst today. When we close my eyes and envision Jesus picking up a child today, what do we see? 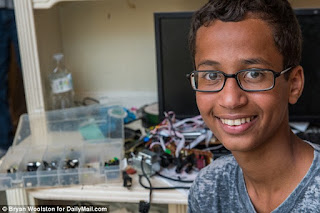 For starters, we might see Ahmed Mohamed, the 14 year old who lives in Irving, Texas and was arrested this week because his teacher thought his homemade clock that he was pretty proud of was a bomb. Now, granted, Ahmed is a little big for Jesus to pick up, so maybe we’ll envision Jesus giving him a big bear hug instead. Or maybe we could envision standing there next to him in the principal’s office as he was handcuffed and led out of the school.

I’m certain Jesus was there when he was booked, whispering, “It’s okay, Ahmed. I have no idea why this is happening to you and I’m so incredibly sorry. I’ll be right here with you until it’s over. I promise.” I do think I caught a glimpse of Jesus at Ahmed’s press conference on Thursday, nudging him gently towards the microphone because surely the kid was a little nervous. I mean, he woke up Wednesday morning excited to take a project to school and by Wednesday afternoon he was a hashtag.

I see Christ in the story and in the face of Ahmed Mohamed. I hear Christ saying, “Look. Watch. Listen. This matters.”

Part of the outcry over Ahmed’s situation, of course, was that he is a brown-skinned child. Many were quick to note that if he had looked more like my children and if his name had been, oh, almost anything other than Ahmed Mohomed, he would not have been as likely to have been arrested. We hope and pray that we do not subject children to the dire consequences of living in a racist society….but we also know that we do. Every day, it seems, there’s another story of how racism hurts children.

This past week it was a study published in the Journal of the American Medical Association Pediatrics that caught my eye. A study of children suffering from appendicitis ran from 2003 to 2010. They found that white children were more likely to receive pain killers in the E.R. when being treated for appendicitis. And even when black children received pain killers, they received lower doses. They were not able to figure out why, just that it’s happening.

And so I can imagine Jesus sitting there in the E.R. with a young black child and her father. Holding her hand and speaking words of comfort as she works through the pain. Counseling the father on how to best advocate for his child. It’s hard being a parent. It’s even harder when the deck frequently seems to be stacked against your beloved child.

I see Christ in the pages of a medical journal. I hear Christ saying, “Look. Watch. Listen. This matters.”

And how could we forget the horrific image from just a few weeks ago of Aylan Kurdi? How I wish I could unsee that image of his sweet three-year-old body washed ashore in Turkey. He and his family were fleeing their homeland of Syria, as so many other tens of thousands have done this year. Aylan perished at sea along with his older brother and his mother.

Surely Jesus was there with them in the boat – Jesus knows a few things about storms at sea, you know. I just know that Jesus was there holding Aylan and his brother and speaking words of comfort and love. I have no idea how you would comfort a child in the midst of that terror, but I trust that Jesus knows.

I see Christ on the beach there with Aylan. I hear Christ saying, “Look. Watch. Listen. This matters.”

We want to believe, of course, that we here in the United States would handle the steady stream of refugees better. But then I think about the refugees who have been coming into this country from Central America. Migrants? Refugees? It’s semantics, right? How about humans? How about beloved children of God?

Right now in our own nation, there are apparently for-profit companies that incarcerate mothers, toddlers, preschoolers, children from Central America.[2] There is a newly-constructed Family Residential Center (“residential center” sounds so much nicer than “prison,” doesn’t it?) in Dilley, TX that can hold up to 2,400 human beings, mostly women and children who are seeking asylum in the U.S. and have come here illegally while our government figures out how to deport them back to their home countries. Accusations of mistreatment are plentiful. Bryan Johnson, an immigration attorney working near Dilley says this, “In [the past] year, these investment companies have profited millions off of the illegal detention of children and babies fleeing unthinkable harm in Central America. Because these companies wanted a bigger quarterly dividend, dozens of children, including some of my clients, were denied medical treatment to such a shocking degree that their lives were put at imminent risk of death or serious bodily harm.”[3]

God, please let Jesus be there in that detention center. I hope and pray that Jesus is there with those children. Covering them with a warm blanket at night. Singing lullabies to drown out the sounds of prison life. And providing strength and care for their mothers who have to figure out how to care for these children in the midst of chaos.

I see Christ there at that prison in Dilley, Texas. I hear Christ saying, “Look. Watch. Listen. This matters.”

Jesus holds before us images of children…Ahmed  handcuffed for building a clock, black and brown children trusting doctors and nurses to ease their pain in the E.R., Aylan washed ashore, Maria and Diego and Jessica and Carlos locked up in South Texas…fleeing one horror only to find another.

I don’t really want to see these images. I’d rather think instead of my own children – safe and warm and well-fed and playing without a care in the world. But Jesus has other plans.

The disciples went for a walk with Jesus. They argued about petty things – who’s the most popular? Which one of us will get to be in charge if Jesus goes on vacation next week?

And Jesus picked up a child and redirected their attention. “Look. Watch. Listen. This matters.” The prophet Micah speaks words of instruction: “God has shown you, O Mortals, what is good. And what does the Lord require of you? To act justly and love mercy and to walk humbly with your God.” Jesus shows us, O Mortals, What Matters.

We might not always want to see it. After all, as Nadia Bolz-Weber said in her sermon, children back in Jesus’s day were perceived as “useless and often unwanted.” The disciples probably weren’t planning on paying attention to any children that day.

But Jesus had other plans. Jesus asked them to refocus their attention on What Matters. And What Mattered to Jesus in that moment was a child. I think if Jesus was in the room today, he’d probably do the very same thing. He’d pick up someone who society has labeled as last, least, lost and say to us, “This person right here? They are What Matters.”

And you know what? Thanks be to God for that. Because I don’t know about you, but I really NEED someone to keep me focused on What Matters. Even when it’s unpleasant. Gosh, who are we kidding. ESPECIALLY when it’s unpleasant. That’s a big reason that I come to church and read the Bible and try to keep my eyes on Jesus…because we can count of him to show us What Matters.