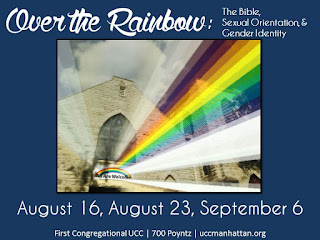 You may have noticed that we don’t solely refer to God as male around here. One of the reasons we use masculine, feminine, and non-gendered language for God is so we can more fully affirm the humanity of women, who, for waaaay too long have not been able to see themselves in God or God in themselves because the Church has only used male pronouns for God.

But there’s another reason to refer to God as a being without gender or as both male and female. And that reason is rooted right here in Genesis, at the very beginning of our Holy Text. In the beginning, we were given the gift of two stories that introduce God to us. And in both stories, God’s gender is….complicated.

Here at First Congregational, we affirm the full humanity of people who are male, female, neither, both, transgender, transsexual, intersex, genderqueer, cisgender, and more. One part of being welcoming is making sure we are aware of some basic terminology when it comes to gender identity…and that we’re always open to learning more because our understanding of gender identity is always evolving.[1]

I bring up genderqueer-ness specifically because of what happens in Genesis 2. The way you’ll likely remember the story is this: God makes Adam and then God feels bad for Adam and wants to give him friends. So eventually, God makes Eve. Man comes first, then woman.

Except. Except it’s not quite that simple. Back in 1973, Biblical scholar Phyllis Trible wrote an article on Genesis 2 and 3[2]. In it, she delves into the Hebrew and notes that the word used consistently for Adam is (wait for it) “adam.” It’s a word that could be translated man, but could just as easily be translated as humankind, humanity, not specifically male – kind of how people used to use “mankind” as a term that meant “everyone.” It’s only after the woman is created that the author begins to use different terms to describe the two humans – “ish” – man – and “ishash” – woman. Trible’s argument is that that first human was without gender or was both genders – genderqueer, outside the binary of male and female. And that the creation of the second human was the point at which male and female came on the scene.

I’ve always thought this was a really cool reading of the text. And the implications are huge. Because not only does this text affirm those who exist outside the binary, but it says something about God. If the first human was genderqueer and created in God’s image, then maybe God is genderqueer, too. How’s that for affirming?

And so…I turned to my friends and colleagues who identify as transgender as I prepared this week’s sermon. I asked them, “What passages in the Bible speak to you and affirm your worth?” Several people mentioned the story of Jacob wrestling with God in the desert and being given a new name after that encounter. Our friend Stephanie Mott shared with me that she loves the passage we heard from Jeremiah – about God knowing us fully for all eternity. And many folks talked about the passage from Galatians – that promise that God sees us all outside the boxes humanity imposes upon us. We are more than just male or female, enslaved or free, American or Syrian, Christian or Muslim…we are all one in God’s eyes.

In talking with my friends and colleagues, I was turned on to the work of Father Shannon T. L. Kearns, a priest and theologian who is transgender, and has written a beautiful series called the “Trans Passion Narrative.”[3] Father Shannon goes through the entire passion narrative, scene by scene, and interprets it from his location as someone who is trans.

One of the beautiful things about being open and affirming to people of every gender identity is that the Church is enhanced, enriched, and enlivened by voices that were previously silenced. My soul was moved and my ears heard in a new ways when I read Father Shannon’s Trans Passion Narrative. The passage I wanted to highlight for you today is his reading of the Last Supper.[4]

Father Shannon says that he wasn’t originally planning on writing about it. The language of the broken body and blood being poured out for others didn’t appeal to him. After all, he says, “So much of the way I have told my own story has been the complete opposite. I needed to reiterate over and over that I transitioned for myself….In some ways transitioning was a selfish act; I needed to be seen as who I really am. I needed to be in a body that was the right body. It wasn’t for other people…So how could I possibly say that this was my body broken for other people? That I shed my blood for other people?”

But then, Shannon got an email from his little sister who was almost 11 at the time he wrote this. I’ll let him tell you the story:

My mom sent me an email saying that my little sister’s class was writing an “operetta” on heroes and she chose me as her hero. Now, my mom hasn’t told my sister about my transition, but my sister has seen me since I started transition, we talk on the phone. In a lot of ways I know that she gets it even without being told…And I am still her sibling and she claims me as her hero. And I realized that in some ways I transitioned for her.

As her older sibling, I want my sister to be happy in the world. To be at peace in her own skin. I want her to wake up in the morning, look in the mirror, and love who she sees….How could I possibly inspire her to be herself if I wasn’t being myself? If every time I looked in the mirror I hated the person I saw staring back at me? If I continued to walk with my shoulders rounded in order to hide my chest? If, once I started transition, I avoided coming home to see my family because I didn’t want them to know about me? How could I possibly be an example to her if I hated myself and was ashamed of my life?

Jesus knew that even after he died that he would be remembered and carried on in the lives of the people who loved him. And he knew that by living the life he was called to, even if it meant death, was a better example for the people he loved than playing it safe and living unscathed.

That is the legacy I want my siblings to have. To know that a life lived truly, authentically, bodily is a life well lived. That to follow your heart, to follow your gut, even if it leads you to scary places is worth it. I want them to know that no matter who they are they will be held in my embrace and loved. So I broke my body for them, so that I could show them that even with scars you can be okay. To be wholly yourself, living wholly in your body is a holy endeavor.