“Star Wars: The Turn Towards Hope”

A long time ago...in a galaxy not so far away, a child was born whose birth had been foretold for generations. “The Lord will arise upon you, and his glory will appear over you. Nations shall come to your light, and kings to the brightness of your dawn,” said the prophets of old.

The baby was named Emmanuel, for through him, all people were to realize that God was fully present with them. His birth was so unsettling that even people from far away - people who did not worship the God of Abraham and Sarah - took notice.

The Gospel of Luke tells us that there were shepherds keeping watch over their flocks by night. When the glory of the angels shone ‘round, they dropped everything and went to see the babe. The Gospel of Matthew tells us that there were magi in the East - wisdom-seekers, sooth-sayers, dream-watchers. The magi, these wise ones, practitioners of another faith, studied and saw his birth written in the stars. And so they traveled to Jerusalem - to the capital - seeking the child. But he was not to be found under the bright city lights.

Instead, he was in tiny, sleepy Bethlehem - House of Bread - for he had come to fill the hungry with good things. Upon hearing of the magi and their quest, the King of the Land, Herod, intervened. He wished to use the magi as his spies. He felt threatened by this star at its rising. Surely this child, just a baby, had not come to threaten his power?

Herod sent the magi on their way, commanding them to bring back information about the newborn baby. It became a reconnaissance mission.

The magi continued to follow the star and when they saw the place illuminated by its light, they were overwhelmed with joy. They brought forth gifts for the child and his family from their treasure chests - gifts fit for a king. And they fell down and worshiped him, the One who prophets foretold.

And having been warned in a dream not to return to Herod, that Other King, they left for their own country by another road.

***********
This is an old, old story. And many of us also remember what happens next. David Lose says that there are two ways to tell this story. One is as a story for children - we focus on the gifts of the magi; we sing songs about little drummer boys playing for the babe; we kneel together at the manger. And all is well.

But then there’s the story for adults. The one that continues in the rest of the second chapter. We didn’t hear it today, but you may already know it. An angel appears and warns Joseph that his child’s life is in danger. The family flees to Egypt - refugees. Herod, enraged, feels even more threatened by the baby Jesus. He orders all children aged two and under to be killed. “"A voice was heard in Ramah, wailing and loud lamentation, Rachel weeping for her children; she refused to be consoled, because they are no more."

That’s the story for grown ups. And we live in a very grown up world, don’t we? For we have our own Herods, our own fearful tyrants who are governed by and govern by fear. And we have our own innocents who are sacrificed on the altar of fear.

A 12 year old child is gunned down by those who are paid to serve and protect him. Killed less than two seconds after the police arrive, for holding a toy gun in an open carry state. And the Powers That Be have determined that no charges will be filed for a killing that millions of eyes have now witnessed. The whole thing was caught on tape and it makes not one iota of difference. Tamir Rice has joined the ranks of too many black children who have died on the altar of fear. Killed because the Evil of white supremacy feeds on fear, whispers words of fear. White people are taught to fear and another child dies.

“"A voice was heard in Ramah, wailing and loud lamentation, Rachel weeping for her children; she refused to be consoled, because they are no more."

Similar fears keep our children who live in poverty isolated, our schools segregated, children of color who are as young as 3 or 4 years old regularly expelled from preschool as their parents watch them herded into the cradle-to-prison pipeline. A hyper-capitalist society with very few safety nets remaining feeds on fear. Fear is the grease that keeps the cogs turning, the peasants scrambling, the parents trapped and wailing.

Fear is also the fuel that keeps the fires of xenophobia burning. Fear is the liar who whispers that we must be afraid of the foreigner, especially if they have dark skin, or speak another language, or worship in ways that are different than ours.

Fear is the fool who dares to suggest there is only one way to be a boy or a girl, and demands that children fit into those boxes precisely. Fear is the one that demands our children do violence to themselves - their bodies, their spirits - all in the name of fitting into some arbitrary mold.

Fear of course is the Enemy. And the choice is really no different now than it was in Jesus’s time: We choose fear or we can choose openness. I know which one I want to choose, and I am pretty certain most of us here would rather live into openness rather than fear. But to do so is a decidedly counter-cultural thing. As we seek to live with hearts open, what lights our path?

There is no shortage of stars, of course. The stars beckon to us from MSNBC, ESPN, and Twitter. It sometimes seems as if there are so many stars….and the stars seems to be at war. They lead us on different paths. They claim different truths. They clamor for our attention and loyalty.

You know, I’m always amazed that the magi went. I mean, if that star was so bright, surely everyone could see it, right? But not everyone followed. Maybe there were too many stars competing for their attention and loyalty. Maybe they had star wars of their own to deal with.

AME pastor William Watley says, “It isn’t the light that we see, but the light that we follow that makes us wise.” Maybe all those other people saw the star, but didn’t take action. Only the wise ones got up and turned towards hope.

My friend and colleague, the Rev. Thea Leticia Racelis gave me this gem of wisdom last week and now I want to give it to you. Thea said, “My prayer is not for God to speak, but for God to give me the courage to listen with my whole life.” 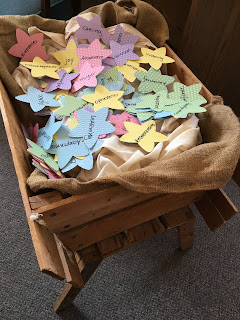 As we mark another trip around the sun and a new year dawns, I want to invite you to listen with your whole life in a new way this year. In just a few moments, I’m going to ask the ushers to pass around the offering plates, but instead of putting something IN them this time around, I want you to take something OUT. We’ll pass the plates a second time in a few minutes for the offertory.

In the plate, you’ll find a Star Gift. Each one is unique and has a word printed on it. Don’t look and go rummaging around trying to figure out which one you want - instead, just reach in and let a particular star find YOU.

The word on the star is yours for the coming year. It’s meant to be guidance - among all the stars that are at war trying to claim our attention - perhaps this one star can be the one that whispers words of openness and hope to you in 2016.

Now the star gifts are only as helpful as we let them be. If they get shoved to the bottom of a bag or left forlorn on the floor of our car, they won’t do us much good. But perhaps if we hang them where we can see them and remind themselves of them, they really can guide our lives in the coming year.

So receive your gift now. And may this star guide you on your way as we defiantly refuse to bow to fear and turn, instead, towards hope. Amen.
Posted by Rev. Caela Simmons Wood at 10:56 AM